by AlloAyiti
in Diaspora, Haiti
0

Neg Kreyol, Inc. and Fanm Kreyol, Inc. are a brotherhood and sisterhood of Haitians who advocate for Haiti and community service.

At FAU, there are two groups of Haitian students that are separate but connected — right down to the red and blue club jackets that mirror Haiti’s flag.

Clubs Neg Kreyol, Inc. (NK) and Fanm Kreyol, Inc. (FK) raise hundreds of dollars for local communities and Haiti through fundraisers, galas and volunteering. Both charitable student organizations were founded at the University of South Florida in 2008, but NK arrived at FAU this year, while FK has been at the university since 2016.

The word “neg” translates to the word “man” and the word “fanm” means “woman” in Haitian Creole. The FAU chapter of NK has 13 members, and FK has 31.

“I just wanted to better myself,” graphic design major and FAU’s NK President John Dorine said. “I was shy and then I went and stepped out of my comfort zone and joined something greater than itself. The brotherhood aspect was what drew me in the most. And once you join you see everything that comes with it, so I was really happy that I made that decision.”

Aghir Boivert, a member who was inducted in November, was also attracted to the connection between the members.

“[I like] having like-minded people around me that have one goal, which is to help out Haiti and the Haitian community, as well as having network opportunities,” Boivert, a management information systems major, said. “I’m excited — there are plenty of opportunities and I just can’t wait to get started and to get to work and participate in the many events.”

FAU’s NK chapter has thirteen members, who are shown above. Photo courtesy of Wendy Dumerlus

Neg Kreyol throws an annual charity gala called “White Noise,” where they celebrate Haitian culture and what it means to be a Haitian man. The event raises money for a mission trip to an orphanage in Léogâne, Haiti. There are performances from singers, poets, and the members of NK. The group also awards two graduating high school seniors college scholarships of $250 each.

Before leaving for the mission trip, NK sends school supplies, clothes, generators, and other donations that they collect from the community to the orphanage. NK also helps the children with their education and computer skills once they arrive.

“It’s giving back to the younger generation … and giving them an opportunity to grow and be better and to serve the community,” Dorine said.

NK also helps children with their homework after school at the Milagro Center in Delray Beach.

Fanm Kreyol is much the same when it comes to community service. Members speak to and mentor high school students, read to local children, and volunteer at food shelters.

For some members, FK was a perfect match.

“I am Haitian, [and] I was looking for something that embraced the culture and also my femininity,” general studies major Tabitha Pierre-Gilles, FK’s student ambassador and community justice chair, said.

Pierre-Gilles was born in Haiti but moved to West Palm Beach in 2008, and said she wanted to “[give] back to the Haitian community, especially the Haitian woman.” 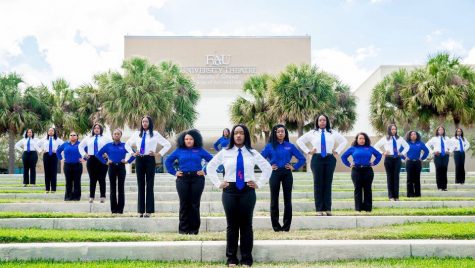 The organization also hosts several fundraisers throughout the year, including a recent raffle that raised $450 for a homeless shelter at the Broward Outreach Center.

Every March 2, which is the anniversary of when FK was founded at USF, Fanm Kreyol throws “Soirée Elegante.” The event is to honor womanhood and achievements in the Haitian community, and provides an opportunity for others to learn about Haitian culture.

The celebration features performances from musicians and poets, as well as the occasional dance or skit presented by FK. Two college scholarships of $500 are also awarded, one to a high school student and the other to a college student who is active in a Haitian Student Organization — the umbrella group that FK and NK are under — in Florida.

The sisterhood also supports their FK sisters that travel to Haiti, and occasionally helps Neg Kreyol with their events.

Shirley Pierre is a contributing writer with the University Press. For information regarding this or other stories, email [email protected].